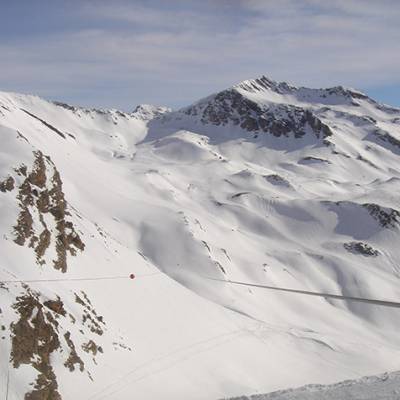 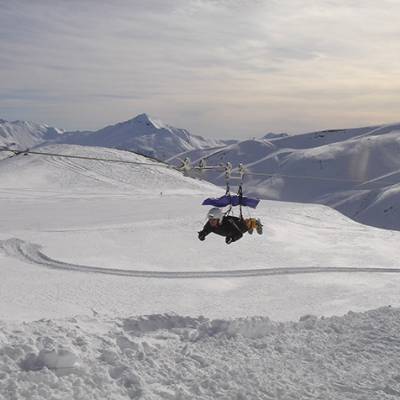 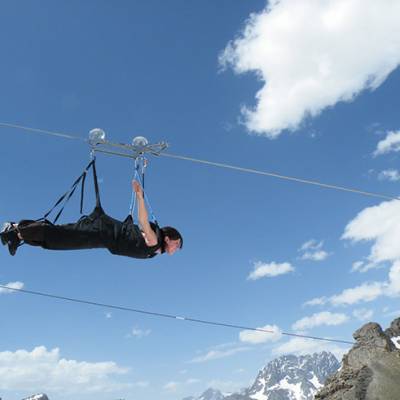 The giant Tyrolean zip wire is situated in the ski resort of Orcières in the Southern French Alps, at an altitude of 2665m.

It is one of the longest and fastest zip wires in Europe and it is the only one open in the winter season!

Travel at up to 130km per hour, head first through the Southern French Alps! An extreme adrenalin buzz - not for the faint hearted!

The wire is 1.9km long and stretches from the top of a mountain down to a high altitude lake - don't worry, you don't finish in the lake!

To get to the start, you need to take two cable car ski lifts up to the top of the mountain. Then you are strapped into a specially adapted harness and off you go!

The views are incredible on your way down but you probably won't have much time to take them in - the whole descent only takes 1 minute and 10 seconds! However you'll be rewarded for your courage with spectacular alpine scenery when you arrive!

The Tyrolean zip wire is a major engineering success and it has taken nearly 10 years of design, trials and safety tests to bring it to fruition. It has been thoroughly tested and is regularly inspected by the French authorities for safety and security.

The Giant Tyrolean is only open when the ski lifts operate, as you need to get the lifts up to the top. In summer, you will need to walk back down to the resort at the end of the Tyrolean so you need to allow a good 1 to 2 hours for the whole activity.

In winter you can only get back down from the Tyrolean via the pistes so ideally need to be on skis or a snowboard. Pedestrians and snowshoers are allowed on the side of the pistes but only until 13h30, so if you want to walk back down, make sure you go up and do the Tyrolean early enough. However the best way is to combine the Tyrolean with a day on the 100+ kms of pistes in Orcières!

A big adrenaline rush for those who like going fast in exposed places!

Minimum age is 8 and maximum weight is 120kg.

No skill or previous experience is required. The zip wire is accessible for every member of the family!