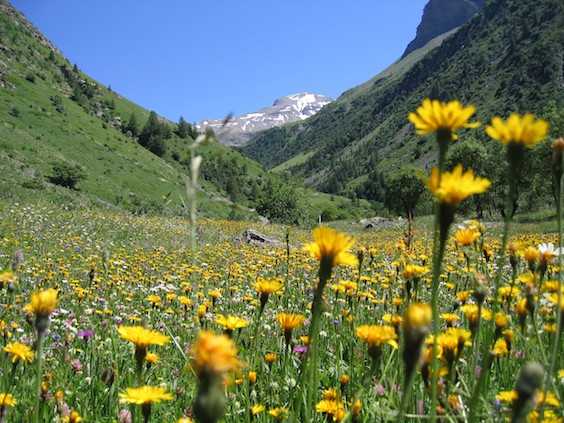 The Southern Alps is the home of the largest national park in France - The Ecrins National Park.

In the core zone of the Park you can find over 150 dramatic peaks over 3000m high, with the highest being the Barre des Ecrins standing at 4 102m. There are 170 km2 of spectacular glaciers, 1800 plant species of which 35 are endemic, and 216 are rare or endangered.

There is a wealth of fauna including chamois, marmots, and golden eagles to name but a few. The Parks location and biological diversity has even encouraged wolves and lynx back to the area. After the overhunting of the ibex in the 1960s - 70s the park successfully reintrouduced the species to the Ecrins area from 1989 to 1995.

The Park was created in 1973 due to its ecological and cultural value. It's main aim is to protect species and their habitats through a range of educational campaigns, initiatives and guidelines.

The core zone of the Park is 918 km2 and is subject to special rules and a strict code of practice. Human activity is restricted in this area, people can't live in the Park perimeter and agricultural practices are curbed. Then there is a more relaxed 'partnership zone' which surrounds the main protected area (180 km2) and adheres to a set of guidelines developed by local councils.

Tourists are welcome in Ecrins National Park and there is a network of 700km maintained paths and a number of gites and high mountain refuges. However, visitors must adhere to strict rules, for example, no dogs are allowed with in the perimeter of the Park, and camping, mountain biking, and picking flowers are all prohibited.