The Southern French Alps is one of the wildest and undeveloped areas in France. As a result a wide range of wildlife can be found here. Due to its predominantly alpine landscapes it is home to chamois, mouflon, ibex and marmots. Wolves are now well established in the area and there have been lynx sightings. If you would like to immerse yourself in the Alpine wildlife of the Southern French Alps, then have a look at our wolf tracking trip.

A chamois is a goat-antelope species native to mountains in Europe. They live at moderately high altitudes and are adapted to living in precipitous, rugged, rocky terrain. They can be found at elevations of at least 3,600 m. Chamois usually use speed and stealth to escape predators (which include wolves, lynx, golden eagles and humans). They can reach speeds of up to 50km per hour (31 mph) and can jump as high as 2m vertically and a distance of 6m horizontally. 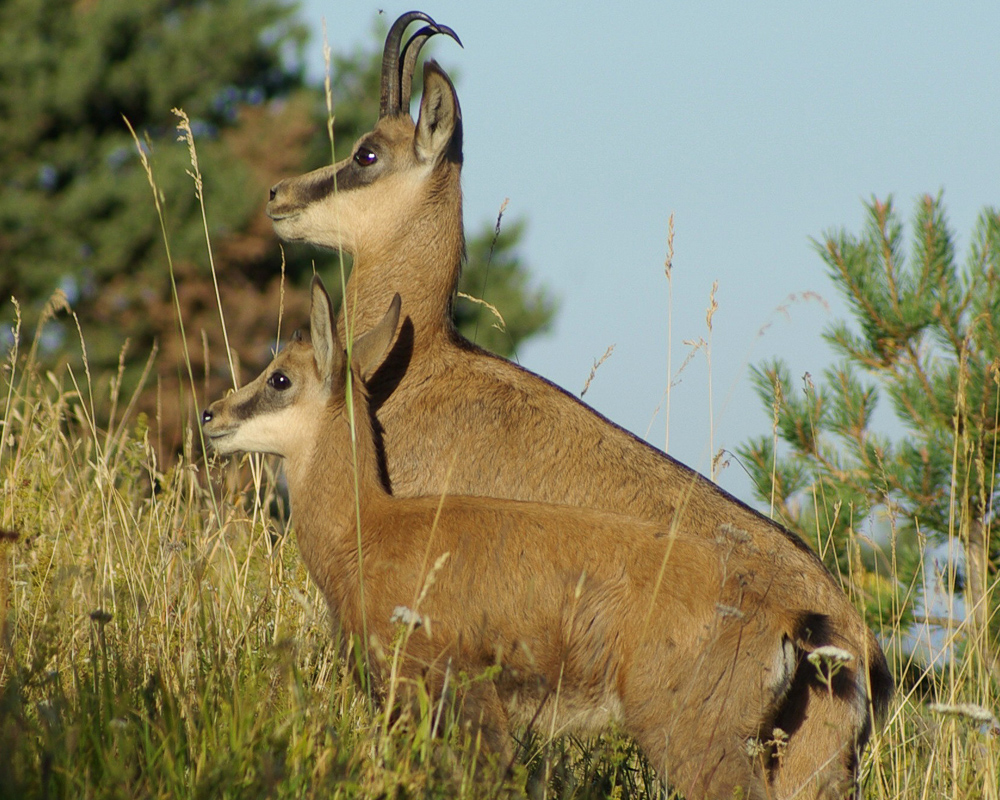 Ibex were hunted to extinction in the region in the 1960s. They have since been successfully reintroduced by the Ecrins National Park. The ibex is a species of goat that is an excellent climber. Its preferred habitat is the rocky region along the snow line above alpine forests, where it occupies steep, rough terrain at elevations of 1,800 to 3,300 metres. They can be recognised by their large, backwards-curving horns with numerous ridges along their length. The male's horns are substantially longer than females reaching up to 98cm in length.

Mouflon are a subspecies group of wild sheep. They have very impressive curved horns, which on males can curve back round on themselves, and weigh up to 16kg. The are not native to the Southern Alps and were introduced in 1950 from Corsica by hunters. 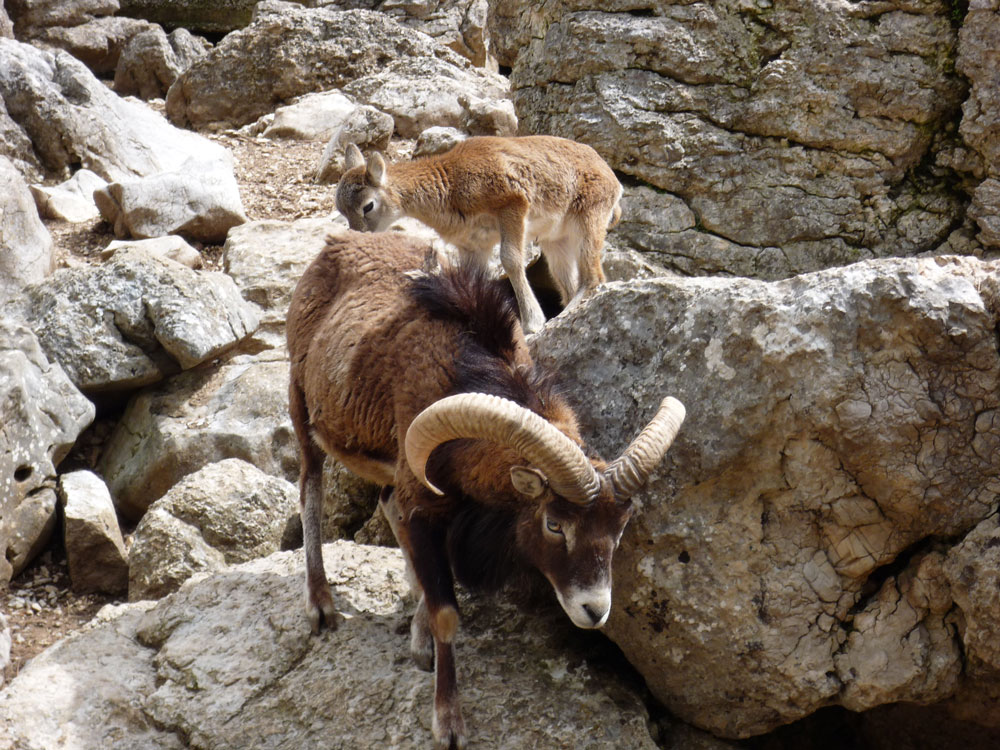 Marmots are large ground squirrels that live in burrows in mountainous areas and hibernate during winter. Highly sociable they use loud whistles to communicate with one another, especially when alarmed. They mainly emerge from their burrows to feed in the mornings and evenings, as they are not well suited to heat. When the weather is suitable, they will consume large amounts of food in order to create a layer of fat on their body, enabling them to survive their hibernation period during winter months. 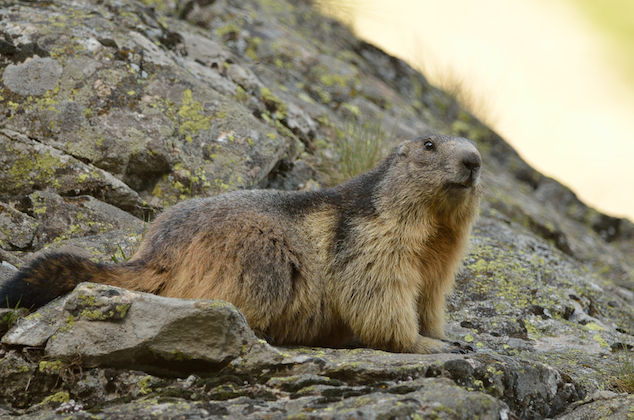 Roe deer are well adapted to cold environments and are very agile and graceful. They live in woodland areas and feed mainly on grass, leaves, berries and young shoots. When alarmed they bark like a dog and flash out their white rump patches. Initially it is the female who goes looking for a mate and it is common for her to lure the buck back into her territory before mating.

The Lynx is a species of wildcat and it too was hunted out of the area in the 1930s. It has always had a presence in eastern Europe and gradually, like the wolves it has migrated in search of new territories.

The lynx inhabits high altitude forests with dense cover of shrubs. Although it hunts on the ground, it can climb trees and can swim and catch fish. Its large paws (sometimes larger than a mans foot) are padded for walking on snow. It's a very solitary and discreet animal, its presence is only confirmed by rare sightings and animal attacks.

Further down in the valleys it's not unusual to see roe deer, and up in the sky you may spot golden eagles and bearded futures.

Wolves were hunted out of the Hautes Alpes in the 1930s. From the 1990s they have started to restablish themselves here coming over the border from Italy. The Hautes Alpes with its wild and unspoilt mountains rich in chamois, mouflon, wild boar, deer and other prey, is a perfect habitat. More than half of the entire French wolf population are thought to be concentrated in the Southern French Alps.

Wolves live in packs of 6 - 20 members which will spend 8 - 10 hours moving through thier home range which can be up to 6 000km2. They mark their territory with urine as well as a scent that comes from glands in their tails. These markers are to let other wolves know that the territory has already been claimed. Sightings were rare, but are becoming more common as the wolves are coming down into the valleys looking for easy catches for example, farm animals.

Wild boar are very common in the Alps, especially at lower altitudes under 2000m. They are extremely hardy, adaptable and resistant and also very intelligent. Due to their success, they are considered a problem in some areas as they trample and eat crops and are hunted during the months of September to January. They are social animals and the females and young live together in large groups. Males are more solitary living away from the groups outside of mating season. They are omnivorous with a diet equivalent to humans and will dig for roots and worms and eat rodents lizards, berries and pretty much anything else they can find! 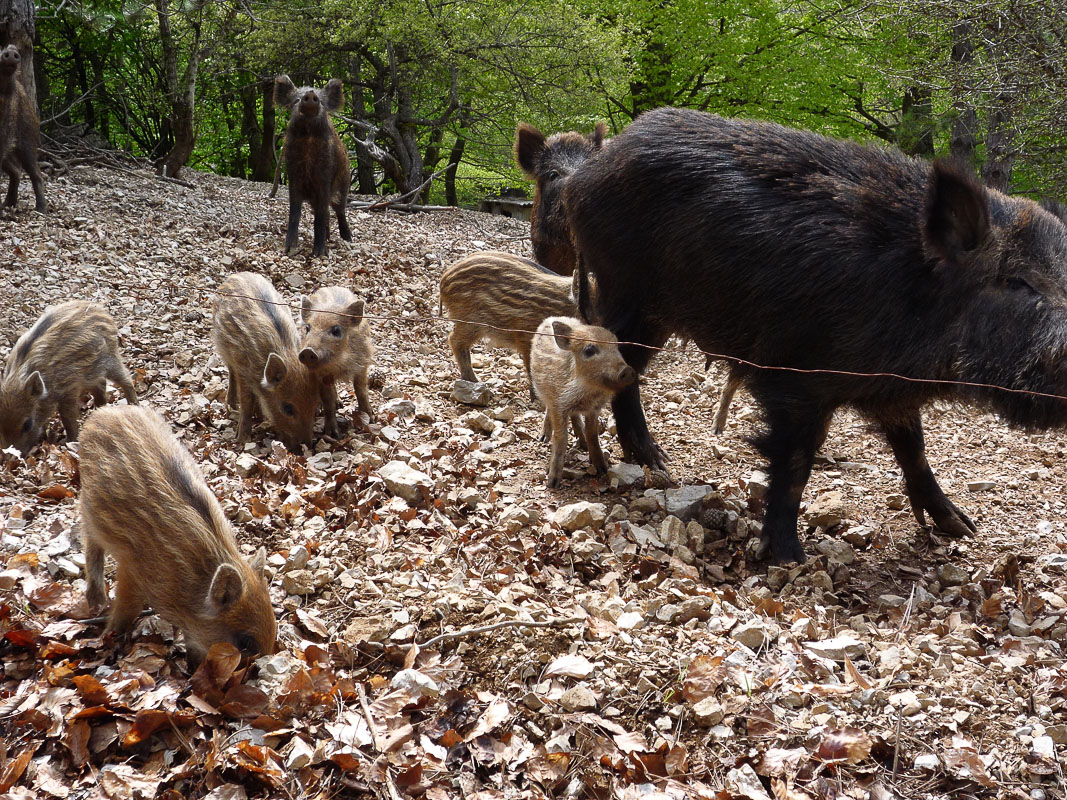 Golden eagles use their agility and speed combined with extremely powerful feet and massive, sharp talons to snatch up a variety of prey which include hares, rabbits, marmots and other ground squirrels. They have territories as large as 200 km2 and build large nests in high places (mainly cliffs) to which they may return for several breeding years. Golden Eagles usually mate for life and breeding pairs are formed in a courtship display. This courtship includes the male picking up a piece of rock and dropping it only to enter into a steep dive and catch it in mid-air. The female takes a clump of earth or small sticks and drops and catches it in the same fashion. Golden Eagles can reach spectacular speeds of up to 240 - 320 km per hour when diving after prey and are classed as one of the fastest moving living animals on earth.

Another bird of prey that is commonly found in the area is the bearded vulture that lives and breeds on cliff faces or in canyons or gorges. Vultures rarely attack healthy animals, but may kill the wounded or sick. When the hide of a carcass is to thick for its beak to open, it waits for a larger scavenger to eat it first. They gorge themselves when prey is abundant, until their crop bulges, and sit to digest their food. They do not carry food to their young in their claws, but disgorge it from the crop. These birds are of great value as scavengers, especially in hot regions. They seem to prefer desolate, lightly-populated areas where predators who provide many bones, such as wolves and Golden Eagles, have healthy populations.

Browse all Holidays Including Wildlife Holidays