My First Ice Climbing Adventure in the Alps

A few years ago, I needed to repaint the exterior of the bathroom window frame, so with my partner keeping her hands on the bottom of the ladder, I ascended and began rubbing down the woodwork ….. and shaking so much because I really don’t like heights! Eventually she’d had enough of feeling the ladder shaking, that she made me come down and we swapped places!

So that gives you some perspective on my life long desire to try climbing! I’ve always loved the outdoors, and the wilderness, and while I wouldn’t consider myself the fittest person around, have always loved that feeling of achievement when you get back after a long day on the fells or the moors, or in this case the mountains, and can feel in your limbs that wonderful sensation of having worked them hard.

And, hitting a certain age, instead of getting a sports car, I’m increasingly finding myself trying out new things, pushing those personal boundaries, and getting outside of my comfort zone.

So given my opening paragraph, abseiling one hundred feet down the side of Avon Gorge was a huge challenge when I did it for the Whale and Dolphin Conservation Society! Terrified at the bottom, looking up to where I was going to go, and terrified at the top about to step backwards over the edge of the cliff, but totally exhilarated when I was at the bottom – my immediate desire was to go back up and do it all over again 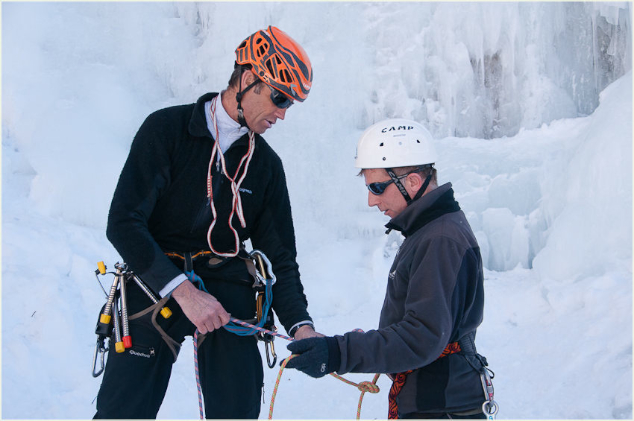 So the prospect of an ice climb, which was offered as an option by Undiscovered Mountains when I booked a with them, was irresistible!

Philippe, our wonderful guide for our snowshoe walks, was also to be my instructor for the climb, and his calm and reassuring manner was very welcome as we approached the stunningly beautiful frozen waterfall. Philippe scampered up the surface of the waterfall, placing screws and attaching rope at various intervals, and generally made it look so easy.

And then it was my turn! Having been fully instructed in how to use the carabiners, and the ice axes, and the crampons, I started and initially found it surprisingly easy. However, it wasn’t very long until, despite having tried to find a suitable route, I felt stuck, and absolutely not at all sure which way to go, and also amazingly tired; so quickly. Despite Philippe’s shouts of encouragement and instruction, feeling deflated, I came down, not at all sure whether a) I was enjoying myself, or b) if I’d ever try to climb again!!But after a five minute rest, I got up, started again, and apparently, in the words of those watching, pretty much scampered up to and over the point that had defeated me just a few minutes earlier, and continued to climb, finding places to secure that ice pick, and kicking hard with my feet to get the grip needed to push myself up and onward. 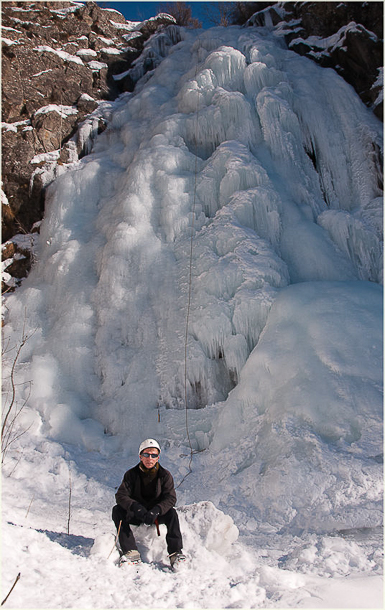 There were difficult sections, some vertical faces proved particularly challenging, especially as the climb progressed and fatigue began to set in. While not thinking of myself as wonderfully fit, I am reasonably so, and was surprised and shocked at how tired I did become during the climb. At one point, once again, I felt stuck, and couldn’t find a way, nor down, and indeed at that point did want to come down again. But wonderful Philippe suddenly stopped understanding English at that point, and simply continued to say “Up, Jerry, up …. Good ….. zats good …… yes, with your hand ….. yes, yes, yes with your foot”.

Glancing down, everyone seemed far away, and I pushed onward and upward, working through the fatigue until at last I was standing at the top!! So marvellous! So wonderful! And such a sense of personal achievement for one who quakes standing on top of a ladder painting the bathroom window frame!

Well, having got up there, it was now time to get down, and while I wasn’t especially graceful or elegant, an abseil controlled by Philippe got me down to the bottom again quite quickly, with a chance to appreciate the beauty of the ice formations as I descended.

So my first ever climb!

Did I enjoy it? Yes, absolutely.

Was it as I expected? That’s a hard one, as having never climbed, I wasn’t sure what to expect. I’ve seen lots of images of climbing, and videos, and it looks beautiful, and exciting, and challenging. And indeed it was all of those things. It was certainly tougher and harder than I thought it would be and I think it was probably, in physical terns, one the toughest things I’ve ever attempted. The emotional challenge was strong too, coping with the height, and the test of endurance.

Was I exhausted? Totally but in that very good way.

And will I do it again? Yes, I want to do it again. In fact one of the first things I did when I got back home was to track down a local climbing wall, to learn some technique, only to discover that it was about to close for 18 months as part of a major gym refurbishment!

And did I enjoy a beer when I got back to the Auberge? You bet!

You can see more pictures, of the climb, and the trip, right here! And feel free to have a look at around the rest of my website, Jerry Fenner Photography, to see what I get up to when I'm not having a fabulous time in the mountains with Undiscovered Mountains!