Anyone under the illusion that snowshoeing is just a boring walk with tennis rackets strapped to their feet, slogging through monotonous snow fields, please read on... and be educated!

Day 1 of our Snowshoeing Trip:

We awoke to very heavy snowfall. The valley was hushed quiet as millions of fat snowflakes fell from the sky absorbing all sound.

Cars made only necessary journeys and we were no exception. The snowploughs came and went with apparently little effect as the new snow refilled the scraped road surfaces instantly with a thick white blanket.

Bruno, our guide for the day decided to drive just a short way up the valley to snowshoe in the woods up to a plateau.

Our faithful minibus with it's brand new snow tyres was ready to take on the challenge but sadly (maybe something to do with the driver.. me??!) had to ask everyone to get out, reverse and take a run up to get up the very short hill. Glad we weren't going anywhere steeper on four wheels!! 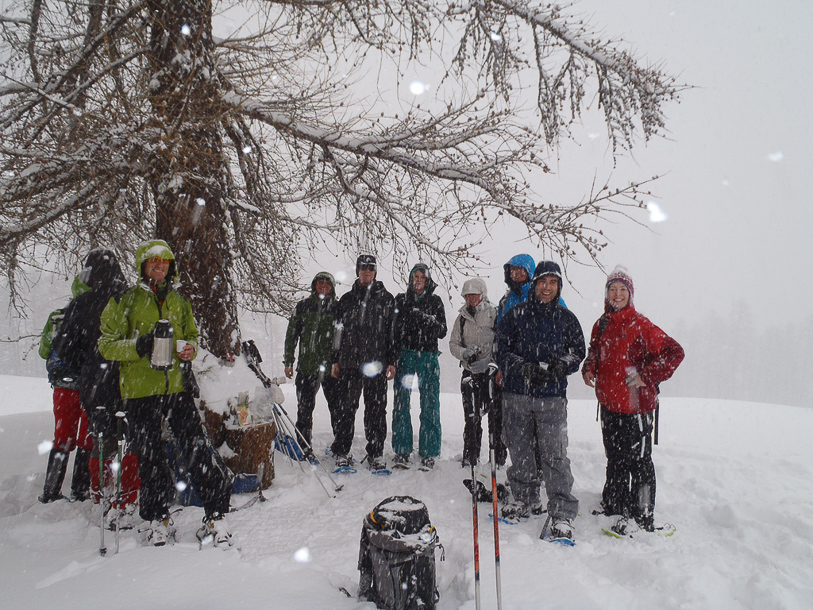 We wrapped up and started our walk through the trees. The snow just got thicker and thicker leaving an ever increasing layer of white icing sugar on the trees. Bruno made tracks in the virgin snow as we wound our way up through the woods, negotiated a couple of interesting streams and eventually ended up just on the edge of a plateau where we had hot tea and biscuits!

Then came the descent!

They say soft white powder is a skiers dream - believe me it's a snowshoer's paradise too. Running down it is like floating on air and if you fall (which we all did of course) it is extremely forgiving!

By the end of the day, everyone had discovered their method, scraping down on their bottom creating a mini avalanche of their own, running with soft knees and heels in, each step rebounding off the powder or trying to walk normally without too much falling head over heels!

It was a fantastic morning in the snow and we deserved our tasty lunch in the Auberge afterwards!

The afternoon was spent sleeping or at least 'in bed' for some whilst the rest of us went sledging - oh what a laugh.

Grown men throwing themselves down a mountain on children's sledges (not at all competitively!!). Us girls sensibly left before it got out of control!

Day 2 - Full Day Snowshoeing up to a summit.

The snow clouds had disappeared revealing blue sky, sunshine and a beautiful white glittering scene. Bernard, our guide for today decided to go for a ridge walk to make the most of the views and we headed up to do the Pic de Gleize. However, we hadn't quite anticipated the wind effect which as well as chasing away the snow clouds, had also shifted half the snow off the mountain and was blowing the white powder in painful sandblasting gusts. Despite the wasted drive we decided to head to a different mountain in the shelter of the wind. Good decision!

We were starting about an hour later than we should have been but it didn't matter. The scene in front of us was spectacular, if a little daunting, as Bernard pointed to the summit to show us our objective. 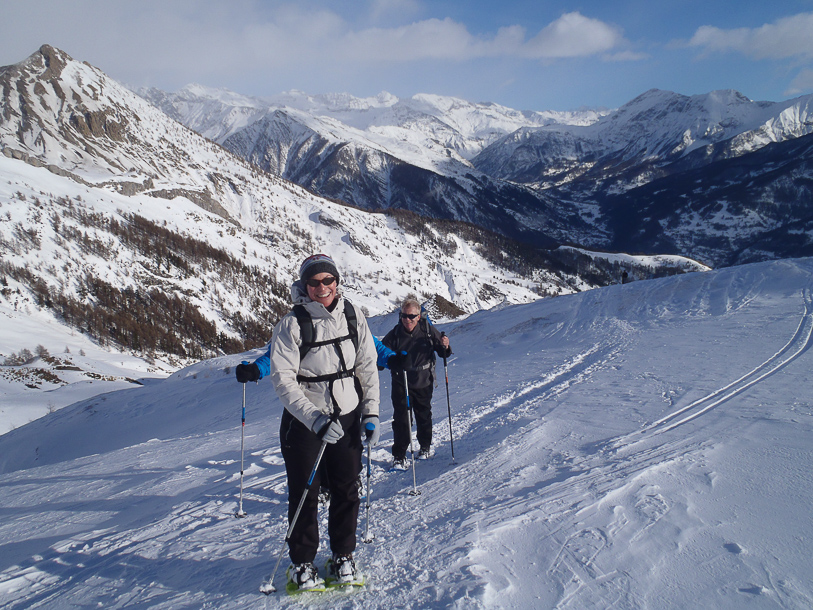 We passed ski tourers who were already on their way down giving off plenty of positive energy vibes having obviously enjoyed their taste of the powder in the sun. This was going to be good!

We followed their tracks for a while, being careful not to destroy them with our snowshoes. Then Bernard challenged us to go off track and make our own way up the mountain. Suddenly the responsibility dawned and we listened intently as he explained how to choose the way: not to traverse across steep slopes, to stay on the top of the little spurs and avoid snow-filled gullies whilst all the time keeping the overall objective of 'the summit' in mind. He omitted to tell us how physically challenging it was to break tracks in deep snow, however!

Luckily the mental stimulation of route finding was enough to distract from the burning thighs and everyone was amazingly good at it! Unfortunately for Louise the distraction was a bit too much and she managed to lose her white glove in the snow. We all watched powerlessly as it tumbled down the mountain. Jonathan was the second victim, losing his glove to a gust of wind at lunch as we sat in the rocky outcrops admiring the view. He managed to retrieve his with little ado and gentleman Kevin generously gave his gloves to Louise for the rest of the climb.

We finally arrived at the top. The endorphins were definitely doing their stuff and with the views, sun and great company... it was fantastic.

We had another snack and hot tea before the downhill attempt. The snow was a little harder this time and a light crust had developed in certain places covering the powder underneath. The trick was to try and find the soft powdery bits where the crust transformation hadn't taken place. The shaded bits were the best bet and we all headed off down with our new-found techniques from yesterday.

Bernard demonstrated a new technique for sliding down (skiing style) a harder crust without breaking it but it was a little bit technical for us novices and pretty much everyone ended up head first in the snow or resorting to sliding down on our backsides!

The glove was found, and with his hero work done for him, Kevin rejoiced!

We made our way back to the Auberge with suntanned faces, that lovely tired feeling in our legs and lots of happy memories!

I wasn't there for the evening so I will have to let the others tell you how it went. Though, it is probably worth noting that it was New Year's Eve, they had a 7 course gourmet meal with a different glass of wine for each course, and they went to bed at 5 in the morning!

Day 3 - The Final Day of our Snowshoeing trip

Thomas (today's guide) and I arrived at 13hrs to take everyone for the afternoon snowshoeing. We were greeted with non-stop giggles and laughter as the night before was revealed. I can confirm they had a good time! It was sunny and lunch outside on the terrace was firmly on the agenda before snowshoeing.

By the time we finally got going it was 14hrs30 and we had decided to go to Prapic, the last village of the valley, with it's traditional alpine architecture of hay lofts, animal housing on the ground floor and living quarters in the middle very much in evidence. Very picturesque.

It was a gentle walk from the village without too much ascent following a river up through the valley with dramatic cliffs and mountains on each side. We saw chamois up in the cliffs and had fun interpreting the animal tracks criss-crossing our path. There had been a hare and a fox and speculation as to who was first and what had happened overtook the conversation for a while! We reached the chapel for another tea and reindeer chocolates from Alison before heading back.

We had been snowshoeing with a 'day after the night before' slow but comfortable pace and suddenly realised that we were probably going to get back down in the dark! The pace didn't quicken though. There was a silent agreement to stay out as long as possible in the mountains. We watched as the retiring sun cast a pink hew over the snowy mountain tops and then turned the sky a deep orange as it set behind the mountains.

Lights flickered on in the darkness lighting up the villages scattered out in front of us in the V of the valley. But it was the lights of Prapic that stole our imagination. A chocolate box scene of snow-covered houses glowing under the orange halo of the village lights. It was astoundingly beautiful and we lingered a little longer to appreciate the beauty - the perfect finale to a great trip.

A big thank you to Kevin, Louise, Alison, Chris, Paul and Jonathan for making this such a top trip! If you would like join us for a snowshoeing trip just get in contact and tell us what you are looking for and we'll sort it for you!

Have a look at the full photo album for this trip on flickr.

If you have a snowshoeing story to share, we'd love to hear it. You can reply to this post in the comments or email sally@undiscoveredmountains.com and be a guest blogger.